Later in the process, strong disagreements emerged about the direction the plan was taking, and an additional round of consultation , above and beyond that required by the Regulations, was used to reconcile differences. In the final plan, considerable changes were made to reflect these concerns. This was considered to be a successful demonstration that the plan was democratically based, and featured in the 'Consultation Statement' that must accompany all Neighbourhood Plans. 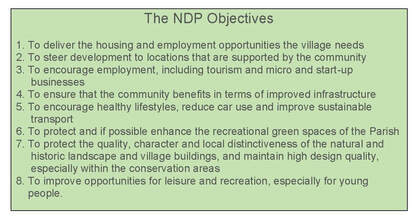 ​One of the first things to emerge from community involvement was a Vision and a set of Objectives.

​These would form the early part of the Plan, and then policies would be developed to bring about the objectives. Policy ideas were noted at this stage, but not developed. 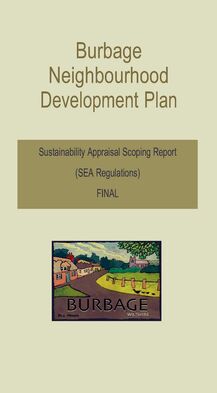 Because plans must be based on evidence, not just the wishes of the community, a Scoping Report was produced by the Steering Group and PlanningStreet working together. This research provided hard data on every issue that might be feature in the Plan. The data eventually found an additional use as the basis for the SEA (Strategic Environmental Assessment) Report that it was necessary for PlanningStreet to produce.

Firstly however, PlanningStreet used the Scoping Report to produce a table showing the issues that had been discovered (such as the importance of local wildlife, heritage and issues with transport and facilities).

At the recommendation of PlanningStreet, more research was also done including a Housing Needs Survey.

Using all of the research data, ​PlanningStreet then showed what legally-workable policy options there were for each issue. The Steering Group used these and its own ideas to select which ones to take forward.

Once initial consultation and research had taken place, PlanningStreet produced a draft Plan, which went to and from between the consultancy and the Steering Group as ideas were developed and refined.

​Many critical comments were received and accordingly PlanningStreet advised that ​the plan should be comprehensively revised and a second, non statutory consultation undertaken. This was done and the plan was then well received. ​